From Saint Gredible and Her Fat Dad’s Mass 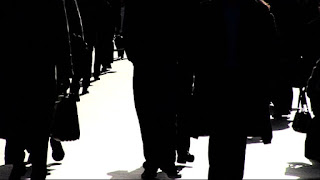 "Boyoboyo boyo! Nobbie sure was a berry busy book writer!"

"Yup, and when your Abba died, Kinko’s stock sunk 22 points."

A sleek black convertible pulled partway up the drive distracting from their tasks. One tire dug heavy into overgrown grass and, blazing, a fender projected obliquely into the street.

Gretchen Sarah Ider raised soft eyes to catch the wide ones of Stanislaus Anthony Imerese. Purposefully, she trotted from the open garage toward the ancient driver with Stan starting a slow ten paces behind.

A large boney palm with ring weighted fingers beckoned her to hurry. They curled and unfurled imperiously beneath a watchband of gold glowing brighter than the gauzy morning sunlight. Its owner caught Stan gazing at blueblack numbers starkly visible beneath their arm’s hair, heavy straight and dark. A quick eyebrow arch, more amused than challenging, jerked Stan Imerese to shift quickly back and away.

“Come here so I see you better.” The dark papyrus hand cupped her chin, lifting her face for its man’s satisfaction. “Every time you grow more into your beauty. Do you know that? Do you study and learn? Does fat papa keep you busy at books? Books keep lovely girls from troubles. Do you know? He should know.”

He surveyed her calmly. An upturned palm extended a silent invitation for her to grasp it, and she cautiously complied. “He inside?” He shrugged toward the doomed house with his chin.

“He’s boxing and sorting more," she explained in sad resignation.

Gretel loped quickly into the house.

“So you’re helping Avram? You’re his friend.” The same shrug. “Any timetable yet? He wait for market to bounce back?” The old man shook his head, pleasurably dismayed at the world's inextinguishable folly.

Another man, younger but shrunken in limp squatness, sat forward facing and impassive beside him. “Meet my son, Benny. Benny! Say hello to the friend of Avram!”

Benny turned a childish smile. His thin voiced squeaked, “Hi, pleased to meetchew. My name is Benny,” and Benny, once his greeting was requited, turned again silently forward.

“This my son, Benny.” Now the old man's shrug was just a small shift of one shoulder. “So, Avram still think he gonna rent?” He frowned at the strangeness of the idea. “Nobody want place like this now. Is good for 1972, not now. He need look forward. Not back.”

Holding himself rigid, Avram Matteus Ider strode bravely from the empty house. In his jolliest voice he called out, “Thanks for coming over here! Was just thinking of calling!”

The old man nodded derisively. His yellowed t-shirt, a sleeveless wifebeater, cast sharp contrast with his car’s opulence but also with his obvious age. His sleepy passenger was decked just as incongruously in a faux leather jacket nearly as glossy black as the open convertible whose motor purred like a fed feline considering a playful pounce.

“Just move along. Quiet! Move! Move! Look forward. Follow commands. Help me watch out for you. Go. Go quickly! Don’t slow the lines! Be wise. Be intelligent! Move! Help me help you. Stay silent. Just go. Look forward. Move! Stay in line! Quietly!  Quickly! Look forward only. Move! Believe me! Only forward. Just go.”
From both sides, out of the night’s dark cold, came eye stabbing lights dazing enough to sharply enforce harsh shouts, guttural commands, and earnest urgings from all directions to look straight ahead and move forward. And terrified, uncramming themselves from fetid boxcars, they moved forward. Only forward.

“Avram! Avram! When you gonna finish? You can’t move this along? Again, I say let me help you. Matuski I could send with trucks. They bring to auction, bring to New England, to the goddam dump! Believe me. This so unnecessary. You should get going. Move this along. Look forward, not back! Whachu waiting for?”

“We’re almost finished. Made a lot of progress today! Stan’s a great helper here. I jest gotta sort this all out my own way.”

“Look. You think you’re so well fixed? All you need just send kid to college? You crazy? You don’t know what can happen. And Sheila. She’s gonna need pretty soon. The way she spend? Pretty soon!” The idea seemed gleefully pleasing in some wry way. And then with more mockery, “Soon you be the only man. Everything will be on your shoulders. Then what, huh? Huh?”

“Everything’s alright. I’m taking care of it. Ok?” Abe was smiling, but there was a glint of warning too.

Shaking in anger he squeezed the plastic bottle, farting semisweet chocolate syrup over mounds of dark ice-cream. Spitting in his ear now, she raged on. “Don’t hide behind that child! Don’t make like she’s frightened of just me. She’s frightened of THIS! Of us! Of you! Of my father. Our history. Everything! Not just me!”
Refusing to look at her and refusing to answer, he scooped in another scoop and shook the bottle to force forward a strong stream that soon pooled up from the bottom of the broad bowl. “You are disgusting. That’s so sick! THAT is an addiction! You’re gonna eat all that now? That’s how you deal with life’s problems? I’m waiting for you to put on your big boy pants and get all this settled. And don’t walk away again!”
“They won’t fit over my fat pampers,” he half mumbled, half spat. Bowl bearing, he stumbled away.  And seething, she followed.

There beneath the blue suburban skies.


“Look. Whaddya think you get for this place? They just knock down and put up something decent. Sell for a million twenty-five, a million thirty to some damn fool. So you get 600, 680? Let me help you. I take off your hands for 750, 800. I do what I can. She gets it all anyway, you know. You know that, doncha? And Benny. I know you’ll do right for Benny. Benny? Benny! Benny! Say hi to Avram, willya, sweetheart?"

“Benny!” Abe lumbered gaily to the passenger side. “Benny! Good to see ya! Pops got you out for a nice ride? Ya need a shave, Benny. Don’t they shave ya at that place, Benny? Huh?”

Once they pulled away, leaving tire tracks on the lawn, Stanley turned wide eyed to Abe. “That’s him huh?”

“That’s him. King of the Moneyjews. Wouldn’t put it past he made Roy Cohn suck him off just to givim AIDS. That’s him, alright.”

“It hurts for him to walk now.”

“It hurts you to seem doesn’t it.”

From Saint Gredible and Her Fat Dad’s Mass

Clog your email with this crap?