ANTIFA GAMES ON THE COMMONWEALTH GREEN

“That’s it! Cops just hustled them all into a van.” Stan held his shaky friend's elbow, guiding him quietly toward tree shade.

“Surely we couldn't hear ye. Maybe we could get a pizza and something to drink?”

“Guess you'll have to check em out on YouTube.”

“Right. But I been sweltering here. At least I stopped sweating."

“Wait! Dey gots water over there.”

“Yo! Hello! That water for anyone? Or jest the warrior class?”

“We're out of full small ones. Can I pour?” A young man in black tights held out a gallon jug and offered a clear empty pint.

“Oh. Why thank you. A gentleman and a scholar you are. Much appreciated.”

“You don't have to pay.” A young woman, also blackclad, smiled.

“Yeah. But. Here ya go. Oops!” Abe, recovering from a partial stumble, returned her pleasant smile. “I dunno bout you, but I'm actually glad I didn't see no NAZIs.”

“They were here though," said someone through a Jesse James mask.

From a lithe tree leaning desperado several dark paces away, "Hey didn't I see you on the bandstand?"

“Not me. Couldn't get near it. Wasn't allowed.”

"So you tried to get in there."

From a young Errol Flynn with flowing Robin Hood hair and Captain Blood goatee, "Are you a NAZI?"

“Are you a fucking NAZI? It's a simple fucking question.”

“You won't give a direct answer! That means you're a NAZI.”

“We don't talk to NAZIs!. Get the fuck outta here.”

“And where should I go? Last I knew this was a public park here since Galileo last dropped a lead lump on his toe.”

“Shut up! Get the fuck outta here. We're asking you nicely.”

“Shut the fuck up! Are you gonna go peacefully?”

“What gives you the right to tell me where to go in any literal sense?”

“NAZI! NAZI here! We gotta a NAZI.” One started as others chorused. “NAZI here. NAZI over here!” More converged pointing, “NAZI! NAZI! Get your red-hot NAZI! Get your ice-cold fascist! Right here! NAZI!”


From a solemn, breathy covenmother came stern instruction, "I'm asking you to leave."

“Doncha see you're doing just what real NAZIs would do?”

From the spearpoint of an oncoming dark phalanx, “We don't take advice from NAZIs! Shut the fuck up!”

“I trust him more than I'd trust a NAZI.”

“Wait a minute. I just found out I wuz a NAZI. Did you know that?”

“Better listen to your friend, NAZI!”

It took a dozen blackshirts, some wearing masks, to ring the hulking mass, and begin hustling him backward.

Amused, alarmed, indignant, and just ornery, Abe let his mass bulk down to the ground as forceful as a frictionless feather.

Passerby's stopped bystanding. Press members pressed in snapping shots and Ninjas pushed back to block them. Abe crawled awkwardly pursuing tossed glasses, deftly grasping them from under a dark warrior's fleet bootstep. Then, self-satisfied, he lay back to survey the surrounding melee in some semblance of blissful serenity.

But round Avram Ider, now nearly one with the ages, was also one with the tumult. He was the cry and the crier, the scuff and the scuffler, the sky and the lier downer. A mature triplet of women wafted through the scrum and floated in close. One held out a hand to gentle Abe who sat up smiling to take it - though it took Stan and a few others, including one blackshirt, to hoist his heft onto unsteady feet.

Sunstruck and perplexed, he let himself be led to a shade dappled bench.

“There wuzn't enough NAZIs so they had to make do!”

"To think I lived long enough to become Heil Hitler!"

“A shock trooper in a stupor. Abe, you don't look so good. Let's just rest a bit here.”

“Wait! Wanna give them back their bottle!”

Waddling grey faced, the weighty man propelled himself toward the encircled card table.

“Here! This yours!" he said before falling forward. 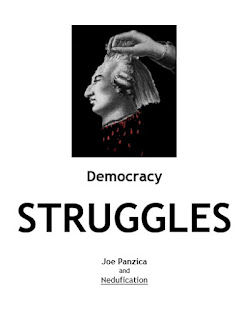 and write a heartfelt review (will ya?)

Clog your email with this crap?